A deeper look into the real Pilgrim story.

We are delighted that two new features attempt to portray the real human experience of the Mayflower Pilgrims rather than the simple iconic view, just as Fay’s historical novel One Candle’s Light set out to do: tell the Thanksgiving Story You Never Knew.

1) A new drama Saints & Strangers, produced by the National Geographic Channel, features actors from Britain, Ireland, and the US who re-enact the Pilgrims’ journey to the New World and interactions with the Native Americans.

The two-night event premieres Sunday, Nov. 22, and Monday, Nov. 23, at 9/8CT on National Geographic Channel (from The Channel Magazine).

Finally, the LA Times has a nice review of both features just out today: ‘Saints & Strangers’ and ‘Pilgrims’ make clear Thanksgiving’s thorny origins.

What “Freedom from Want” Hath Wrought!*

The Pilgrims’ story reminds us of the tremendous obstacles they overcame to leave the relative comfort of Leyden, Holland and settle a congenial community in the wilderness of the New World.  Today we Americans live in the freedom that the colonists hoped to find in this new world. We can hardly imagine the hardships they suffered.

Yet some of us will gorge, watch football or shop on Thanksgiving Day. Others, like the Pilgrims, will reflect and thank God for the freedom they pursued and pioneered on Cape Cod in 1620.

*Freedom from Want is both a quote from President Franklin D. Roosevelt during a speech in 1941 and a well-known painting depicting a family Thanksgiving dinner by Norman Rockwell, published in 1943.

As we approach another Thanksgiving holiday we can celebrate once again the harvest festival as did those English colonists known today as Pilgrims. They gave thanks to God for their colony’s survival even though they lost half their community during the harsh winter of 1621.

These colonists settled Plimoth Plantation not as a trading post but as a permanent community for families. While still aboard the Mayflower they signed a binding compact unique in history because the signers agreed to submit to the authority of the community rather than a monarch.

How significant is this event in American history?  It set a precedent for the form of self-government the Constitutional Congress would confirm one hundred fifty years later in the basic document of our American government.

So take note, Americans. We do not observe Thanksgiving because our first colonists ate turkey and pumpkin pie at harvest time.  We celebrate the Pilgrims for their vision of a community governed by themselves, not an absent king across the sea.  This belief in self-government still underlies our concept of proper order for the community.  And despite the changes suggested by radical new ideas, this concept is inherent in our character. To compromise this basic belief would just be…un-American!

by Fay Alexander | Nov 19, 2013 | Colonies of the Mayflower Descendants 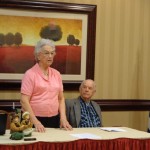 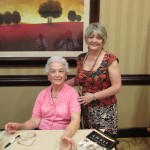 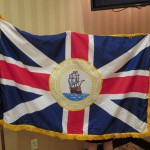 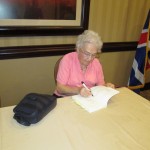 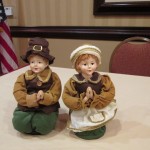 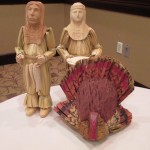 by Fay Alexander | Nov 19, 2013 | Colonies of the Mayflower Descendants 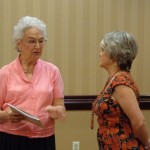 On November 9th, I had the honor of presenting my story about writing One Candle’s Light to the Edward Winslow Colony (of the Florida Society of Mayflower Descendants) in Tallahassee.

It was a very pleasant experience because the group expressed keen interest in my story by their questions and appreciation.

The Governor of the Colony, Suzanne Adams, encourages this group’s curiosity about their ancestors. Her charming emails and persistence convinced me to make the trip, my farthest yet, from Gainesville to Tallahassee.

My husband Bill introduced the group to the English Reformation’s impact on forming the Separatist movement decades before the Pilgrims’ journey to the New World. I followed with my testimony of the Lord’s “word” for me to write this novel.

The Governor thanked me with a gift of Muttart’s book, One Hundred & Eleven Questions & Answers Concerning the Pilgrims. We really appreciated the “warm Tallahassee welcome” and thank Governor Adams for her invitation as well as the group’s reception.